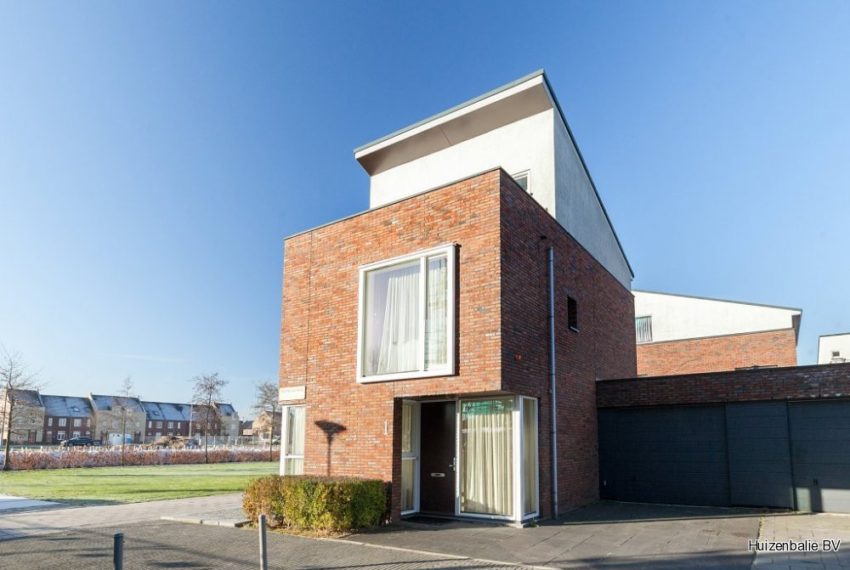 This beautiful and luxurious detached house with 3 bedrooms (possibility of 4) is spacious with an area of ​​180 m2. An ideal family home in the new district of the Plantation Sniep.

Striking is the beautiful open kitchen and spacious living room. The sliding door gives access to the sunny garden, located on the southwest. On the first floor you will find two spacious bedrooms and a luxurious bathroom. In the attic is the master bedroom.

The house is fully equipped with underfloor heating as main heating through a heat / cold storage. This system cools the house in summer and heating in winter. This property is also equipped with an alarm.

Where is The Plantation Sniep?
The plantation Sniep is in a fantastic location along the Weespertrekvaart. Delicious free live and park your car on your own property. Children can just play for the door or in the playground on the green courts. Within 20 minutes you are with your friends or colleagues in the city, with tram 9 or bicycle. At the same time your bike from The Plantation Sniep to the IJ Lake. What else do you want?
This new neighborhood is easily accessible both by car (via A1 and A10), public transport or bicycle. Of course you from your new home as well as in the center of Diemen, pool, schools and other facilities such as sports fields (soccer and tennis, among others) are within walking distance.

By car
The Muiderstraatweg in Diemen Diemen is the road that connects villages and towns in the area. This route will take you from the new district by car in 5 minutes to the center of Diemen and you’re so on the A1 or the A10. Within 15 minutes you are in the center of Amsterdam, Almere and Schiphol.

With public transport
The Muiderstraatweg in Diemen, the final stop and also terminal loop of tram 9. Very useful, because through this line you travel 20 minutes to the center of Amsterdam. In addition there are in the immediate vicinity two train stations, a connection to the underground network and a direct bus Arena Boulevard.

By bike
In new housing Plantation The Sniep you can safely step on the bike. There is a connection to the existing cycle path so you can easily reach the center of Diemen and Amsterdam. Shopping? Within 5 minutes you are at the shops.

By foot
In The Plantation Sniep are many amenities on foot. Schools and sports facilities are around the corner, as are the tram and bus stops. Also lovely green recreational areas (among others Diemerbos) are accessible on foot.

What facilities are there?
In various amenities near the Plantation Sniep. In the immediate vicinity you will find several health centers with GPs, dentists and physical therapists for example. For larger hospitals go to Amsterdam (OLVG and AMC) within 15 minutes. Education is also good in the area. There are primary schools (extracurricular) reception near Plantation The Sniep. Secondary schools, colleges and universities are easily accessible by bicycle or public transport in Diemen and Amsterdam.

Sport and culture
Sports and culture enthusiast? In the management area on the sports Diemen The kinds of sports such as SV Diemen, TVDZ Tennis, Netball Victoria and DKV baseball association TIW Survivors and the natural ice rink. Skating may at the Jaap Eden Ice Rink. Councillor Duran Ago Sports Centre and Swimming with the ability to swim. The cultural life is the theater’s Omval and several ballet schools nearby. Once a year in May the Loswal Festival. Diemer Festival is a concept in Diemen which takes place every year in September.

Shopping and entertainment
In shopping Diemerplein do your groceries and every Wednesday there is a market. After a busy day, take a quick bite to eat or go out? Diemen has excellent restaurants and within 15 minutes you are on the bike at Pathé cinema, concert hall and Ziggo Dome Amsterdam ArenA.

Forests and Parks
A third of Diemen consists of woods and parks. All space for recreation in green: bicycles, picnics, treasure hunting and running. Breathe in the fresh air in the Diemerbos, recreation About Diemen and Diemervijfhoek.